You are here: Home / All / The Miracles of the Habitat Store

Ah, the Habitat for Humanity Restore. This is the miracle establishment where the (still in progress) Tron Arcade Cabinet (project) was obtained for $5. 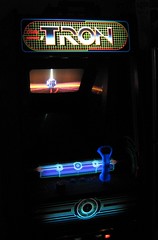 This weekend we found a 19″ MGA (Mitsubishi) Television. Not just any 19″ MGA TV, the exact same model as the one I had as a child (albeit 6″ larger than the one from my youth).

This was the best TV I have ever owned. No, it is not HD, it does not have component video, s-video …or even composite! There are no digital comb filters or any of that. It had, easily, the best picture of any NTSC set I have ever owned.

My brother traded this away foolishly for a crummy RCA 25″ set. That TV died within a few weeks of owning it. I was upset, to say the least.

One of my other brothers, Steve, had the 19″ model and every time I saw the set at his home, I was brought back to my youth–I remember vividly coming home to find the TV after school. It was a month after Hurricane Hugo came through (the TV was built about a week before the hurricane, according to the build date on the back of the set–yes, I was a dork even at age ten). Growing up there was not a lot of money to be had. Mom and Dad lived on what little social security they had earned. Mom put away a little bit for me but fearing my dad would spend it, she withdrew the money from my account. I bought a NES and a handful of games.

I played the NES quite a bit and my dad (not the real father figure type) was always quite annoyed that he had to share the TV. Tired of Dad’s constant complaints, Mom went into debt to buy the TV for me–the set couldn’t have cost more than $200 but that was about 1/6th of our monthly income.

Finding the TV upon my bed was about the happiest memory I can recall from my childhood. I ripped the box open, hooked up my NES and started playing Zelda 2: The Adventure of Link.

I tested it at the store and it worked great. I got the sucker home a few days ago. Today I was able to clear some space for it. I’ve since hooked up one of my Playstations, one of my Genises, one of my Sega Master Systems, one of my NESes, my SNES, my Gamecube, my N64 and my Sega Saturn to it. (Yes, I have lots of game consoles.) I am thinking of hooking up one of my Xboxes, one of my PS2s and one of my Dreamcasts to it (it pays to have multiples).

The picture isn’t quite what I recalled. I mean, all things granted, it is really good but I have a much different context today after a half decade of digital television than I did as a kid.

Still, though, I am stoked.

Here she is, in all her glory. It even came with the remote. 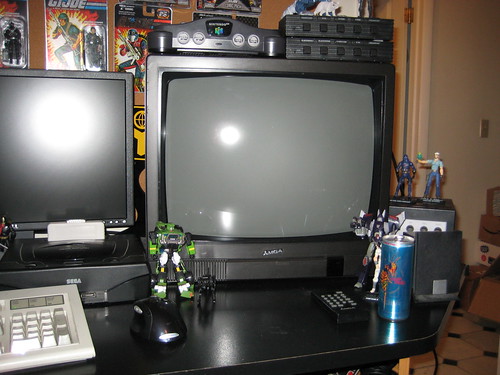