Three years now have passed now since poor Gandalf awkwardly stepped out of this mortal litter box into the limitless laundry room of the universe.The anniversary of his passing went unnoticed and unmarked for the first time. I recall vividly finding his lifeless body upon my return from work, yet I can now barely recall any details of his life. My constant companion, I had him in my life for three years but the memories have all but faded. I loved him dearly but his death had little impact. There were no tears shed, little fanfare. I wrapped his body as best I could and buried him a couple of days after his death, once the ground had a chance to thaw. Still, I was going through some photographs this evening and came across this. This was always my favorite picture of him. While, yes, he was a behemoth of a cat he was still my little kitten. It triggered an emotional response, to be sure. 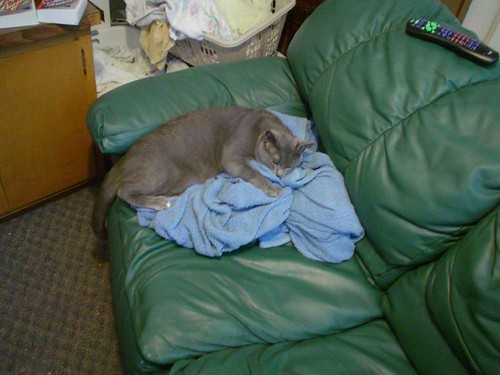 I think after three years, I’ll finally take some time to mourn.This is entirely stream of conscious, but now that I think of it, I wonder if I’ll ever do the same for my father and brother?I never accepted my brother’s death. I didn’t believe it to be true until I saw the body. Once I was out of its presence, I rebooted my emotions and calibrated myself back to zero. Not only do I now hardly believe he died, I hardly believe he lived.My father and I had a strained relationship. Or, rather, my father had a native inability to partner in relationships. He was an island and it was probably for the best. I lived with the man for twenty-two years and what little I knew of him didn’t speak well of his character.Still, he would always give me the change out of his pocket to buy a drink when we were out. On Sunday mornings before he went to church he’d go to the store and bring me back a small bottle of orange juice and a six pack of mini donuts. He loved me, I suppose, the best way he knew how.My brother’s death had little impact to my day to day life. I’d not seen him in a few weeks when we got the news. My father’s bout with cancer completely changed my life for about four months—I can go back and read journal entries or letters written and just feel the frustration, desperation and sense of defeat in my words. His death was a relief and allowed me a brief respite of normalcy. Mother’s passing, on the other hand, completely changed my world. Every single facet of my life changed. Taking care of her was no longer a full time job. I was alone. I was free to do whatever I chose, to pursue a career, an education. Unlike the two prior deaths, I experienced a catharsis which allowed me to move on. I mourned for weeks but I finally let go. There are lots of other things in my life on which I am still clinging, things I need to let go.As I am taking steps toward returning to a state of physical well-being, I feel that I need to focus on a state I’ve never really been able to achieve; a state of emotional well-being. That would truly be a first and something well worth the investment into.

I swear...
Taking Things For Granted