You are here: Home / All / MAME Cabinet Follow-Up

I’m doing some additional work to my MAME cabinet in the coming weeks and will be documenting it for the MAME Cabinet Project page of BrianKilby.com. In the build up to this I’m going to be wrapping up the contents of the page and including schematics—FINALLY. The cabinet itself has been operational for years and I am doing incremental upgrades so that I can finally put a bow on the system. Upcoming I am adding 80mm intake and exhaust fans because it gets WARM. After this whooole process is done, I will be restoring my $5 Tron cabinet.

Part II: What Have I Gotten Myself Into?

Upon undertaking this, I knew very little about how I would do this. I generally lack fear when it comes to taking something apart and attempting to repair or understand.

Without the benefit of photos, I’ll explain what I did.

The sound was being driven from the harness itself, so I would have to find an amplifier to use in its stead. The speakers in the cabinet were 100-watt car/auto speakers. I knew that I could use a simple computer subwoofer/amplifier such as my old Cambridge Soundworks speaker set. I just tossed the speakers included in the set and directly wired the cabinet speakers to the subwoofer using the standard red/black speaker wires which were already attached to the speakers.

The monitor was a standard raster monitor, horizontally oriented. This was self-evident as it was a conversion cabinet which played raster games in a horizontal format like Tekken and formerly Mortal Kombat. The monitor draws its power, obviously, from the power supply. I left the power supply wire intact. The molex connector at the end of the video source cable, however, did me no good. I knew that I wanted to run multiple video sources so I opted to cut the wire and wire it to a standard 15-pin VGA d-sub cable. I wired it to the specifications here. Luckily the wires on the video cable fit standard wiring color conventions.

I had no plans to use any of the components from the cabinet’s controls, other than the panel that the controls were bound to. As I planned to run many different systems (PC, XBox, PS2, Dreamcast) I was going to just use the X-Arcade control board available at X-Gaming’s website. I unlatched the panel from the cabinet and removed the buttons, sticks and all the wiring that ran from the JAMMA harness to the panel.

I kept the JAMMA board, it retained a value on the secondary market and I might eventually want to add a JAMMA harness back to the cabinet.

This was always planned to be an incremental project, I didn’t plan on building this in its entirety from the get-go, so I took a modular approach.

The first component I wanted to add to the cabinet was an X-Box so that I could play my favorite arcade fighting game of the last ten years, Soul Calibur II. I ordered the audio/video adapter from Ultimarc and it arrived at my door within a week.

I opened it, examined it and read up on the particulars of how it would work with my monitor and power supply. I did a tremendous amount of reading and not a lot of acting. I could never find clear direction on whether or not it needed the +5V line wired to it.

I let the project sit for about a year and a half.

Seriously. I had a gutted arcade cabinet sitting in my primary entry way at home for about eighteen months.

Then one Thanksgiving Eve, I couldn’t sleep. I had taken in too much caffeine the evening before and I had to burn it off. Around 2:00 a.m I started working on the cabinet. Around 7:00 a.m. after a lot of trial, error and finger crossing… 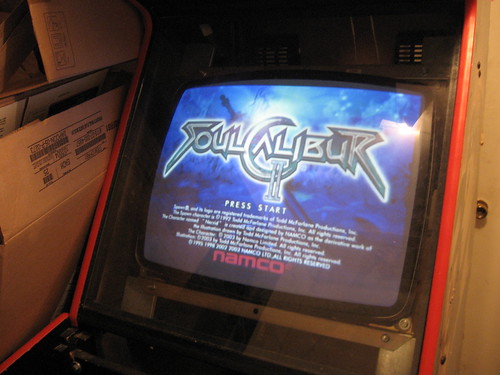 Coming up next: Wiring, Rewiring and Unwiring the Dreamcast, adding the PS2 and the PC. Also, I get a little bit technical…