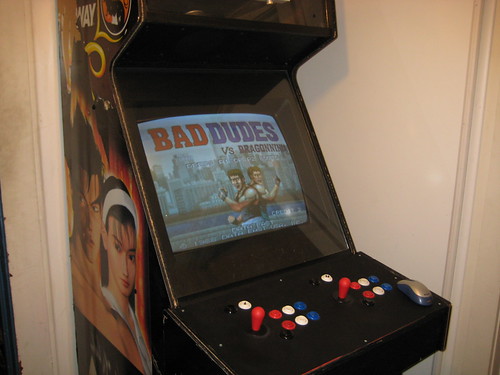 Yes. I have MAME working in the arcade cabinet now. So now it has PS2, XBox and MAME. Thanksgiving of 2006, I finished the wiring of the power supply and wired the video to the XBox. From there it’s all been trial and error. I had the Dreamcast installed but I took it out due to the fact that it didn’t like the switch box used to swap between systems. The Dreamcast only allowed for two real games I wanted to play, the rest of the game are playable through MAME.This Thanksgiving, I finished the wiring of the cabinet but the MAME box came out garbled. Last night I figured out that I needed to run a +5v line to the video amp from the power supply (which wasn’t necessary according to the vague documentation of the video card).Suffice it to say, it works. Most excellent.Now I need to strip the cabinet, fill in some holes, sand it, paint it, decal it and start on the cocktail cabinet.Okay, I probably will never have the cocktail cabinet but it would make a nice end table.