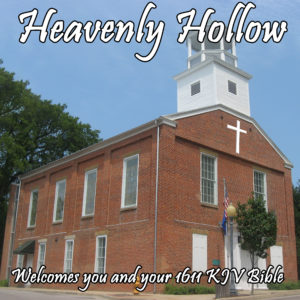 This is a deep cut.  My Happy Day in Wilkes podcast was an attempt to recapture something from my 16 years of working in a small market Christian radio station. It evolved into its own thing, and sort of lost the ethos of what I was originally searching for. This podcast concept was a little too close to the mark of that original feel that I was going for.

On this podcast, I was going to be Keith Kirby of the fictional Heavenly Hollow Independent Baptist Church of Iredell South Carolina. Instead of the veiled Republican spin that you will often hear from the pulpit, I wanted Pastor Keith to keep it real and say whatever he felt like. Christians have, for some reason, hitched their wagons to Trump. If a Christian was being really honest, they’d tell you that Trump’s rhetoric is incompatible with what they say that they believe. On this inaugural episode, I wanted to go after Trump and his cronies as much as I could within the confines of what a pastor might say in the pulpit. Yes, churches are supposed to not be political, but I can’t tell you how many sermons I’ve heard over my ears that are almost duplicates of this one, save the target being Obama or Clinton. I lifted the format from this from about 90% of the radio programs I’d play over my decade and a half as the Sunday morning DJ at my radio station.

I had ambitions to actually put this on the radio on various small market southern radio stations that play paid religious programming on Sunday. As long as there’s a steady check involved, you’re probably not going to get much grief about the material that you mail to radio stations. The idea was for the show to be a little more subtle than this one, and for it to help deprogram people from their crazy dogmatic beliefs and foster more critical thinking. Ultimately, Kim wasn’t comfortable with me doing this and I listened to reason. I think she was worried I might get some gigs preaching revivals back in Wilkes, and she didn’t want to add being a preacher’s wife to her already overstuffed list of responsibilities.