You are here: Home / All / Arcade Cabinet Status Update 3.

First status update was in, uh, March 2005. It was like ‘hey, I have an arcade cabinet and I gutted it’. I was going to put a PC in the cabinet for mame.The cabinet kinda sat there for a year and a half in everyone’s way, it was kind of sad. Had I not gutted it, I could’ve been playing lots of Tekken Tag Tournament.I got the wild hair to install an XBox instead of a PC sometime in 2006, I can’t pinpoint when but I figured that an XBox could be a baby-step toward a PC and a Playstation 2.On Thanksgiving-eve, I finally got around to wiring up the X-Box. I was popped up on Stacker 3 (well, it’s true) and I had energy to spare. My post basically showed that I had successfully wired the XBox video to the cabinet. No big whoop, I had to play the thing with a controller and no sound.Well, today is Update Three. I’ve been at this level of completion for a few weeks now. The controllers and sound are all wired up. The cabinet thumps, the two speakers already installed were pretty killer but I added a subwoofer for extra oomph. 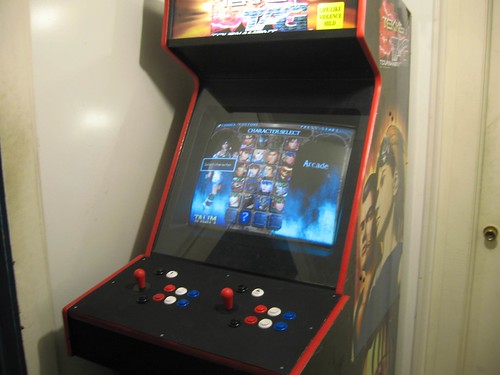 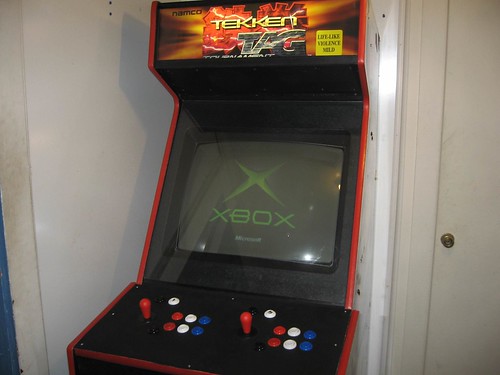 I’m torn on the next step. I don’t know if I want to redeco the cabinet first or add PC/PS2 functionality. I’m not really content with just having the XBox in. Adding in the PS2 would give me the opportunity to play Tekken Tag, Tekken 4, Tekken 5, Soul Calibur III, Street Fighter Alpha Anthology and the entire PS1 library. The PC will allow me to play everything else.If I redeco the cabinet, it’s not only functional, it’s more aesthetically pleasing. (Watching DVDs on this thing is kinda fun.) Adding more hardware makes it more versatile. They’ll both cost about the same, figuring in the cost of the PS2 video adapter and the fact that I’ll be buying a second PS2. Adding a PC just requires (well, not really a requirement but a time saver) that I buy the Ultimarc VGA card.There is something nerdly satisfying playing Capcom Fighting Evolution on this thing, not to mention Guilty Gear X and Dead or Alive 2 Ultimate. (I leave Soul Calibur II in the cabinet, though.)

Another Transformation that's Pr...
Kilby vs. Maki Sushi Round 1